Autumn is here and Halloween is around the corner. Try as you might, you can't help but notice splashes of orange, specifically. Pumpkin orange.

Anyway, I'm not one to complain. If there's a season I love, it's autumn (after summer of course). And with autumn, comes pumpkins.

I'll be honest — I haven't had pumpkin in many ways: roasted or soupy. And it stops there. Yes, I've had pumpkin-spiced latte — the autumnal special of every coffee chain in the Western world. But high doses of sugary syrup doesn't quite tickle my fancy, so I've decided to cut them out of my autumn diet.

Did you know that a cup of pumpkin-spiced latte can have up to 400 calories and 50 grams of sugar?

Not exactly healthy if you ask me.

But it IS a popular drink and pumpkin IS healthy. And as usual, it got me thinking — why not make my own spiced pumpkin breakfast bowl, with no added sugar, yet with all the pumpkin goodness in the world.

It turns out pumpkin smoothies are an excellent breakfast dish full of nutrition and only half the calories of a pumpkin-spiced latte! That is unless you make About Annela's healthy and vegan pumpkin spiced latte. I'm definitley down for that!

The Health Benefits of Pumpkin

Pumpkin, part of the squash family, is a great source of potassium and beta-carotene, which is a carotenoid that converts to vitamin A. It also contains some minerals including calcium and magnesium, as well as vitamins E, C and some B vitamins.

Is Pumpkin a Superfood?

"Superfood" is a trendy marketing term for foods that have high nutritional value. Due to its health benefits, pumpkin is considered a superfood.

In my Watermelon Cashew Gazpacho post, remember that I mentioned that you should eat colourful fruits and vegetables as they are higher in vitamins. The orange colour of pumpkins, much like another orange vegetable, carrots, comes from beta-carotene, and your body converts the beta-carotene into vitamin A, which is important for eye health. Beta-carotene also helps the skin, as it can hamper skin-damaging UV rays.

Pumpkin is also an excellent source of vitamin C, which is important for strengthening the immune system (we all need that these days) and fighting infections. It also increases collagen production. It also reduces oxidative stress, which can prevent premature ageing. Vitamin C also increases white blood cell production and helps heal wounds faster (via Healthline). Another benefit of pumpkin is that it's a great source of fibre, which is necessary for healthy digestion. Fibre also lowers cholesterol and leaves you feeling full longer.

A benefit of pumpkin that many will find surprising is that it helps with muscle recovery.

Pumpkin contains magnesium, which is important for muscle regulation as well as the regulation of the nervous system, which makes it an ideal post-workout snack. Even more than bananas, pumpkin provides an excellent source of potassium, a mineral your body needs for muscle contraction, digestion, and healthy blood pressure.

How to Prepare Pumpkin Puree

If you've made pumpkin pie, you've heard of pumpkin spice. I love this spice mix because it has all my favourite spices in one, including cinnamon, nutmeg, ginger, cloves, and sometimes allspice. Allspice is made from the dried berries of a plant known as Pimenta dioica, which has notes of cinnamon, cloves, nutmeg, and pepper.

If you've made pumpkin pie, there's also a chance you've purchased canned pumpkin pie filling — pumpkin flavoured with pumpkin spice that has been pre-sweetened. In this recipe, we're not interested in pumpkin pie puree. We're looking for pumpkin puree, which can be canned or homemade.

When making pumpkin puree remember to buy about twice its weight as the flesh will typically weigh half of its original weight (depending on the type of pumpkin). Any remaining puree can be used in soups like this scrumptious Hokkaido pumpkin and apple soup by Paleo Low Carb Kate.

To prepare the pumpkin puree, all I had to do was slice the pumpkin in half to remove the seeds and stringy bits. I then placed the two halves flesh side up into the oven over parchment paper and roasted the halves for about 40-50 minutes at 180 degrees Celsius. I then removed the flesh with a spoon and scooped it into a blender. So darn simple! Just make sure to prepare it a day in advance if you plan on having the vegan pumpkin breakfast bowl for breakfast. 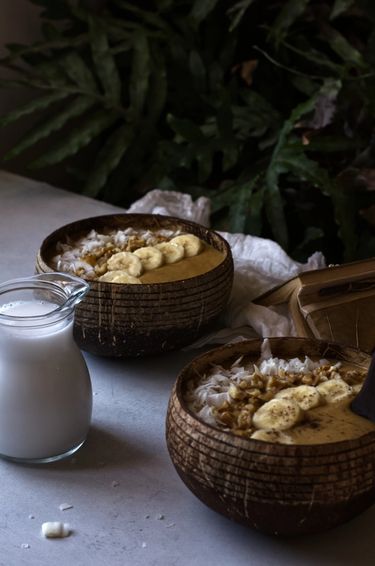 Pumpkin is rarely considered a breakfast item. But a pumpkin breakfast is a nutritious one, with pumpkin having an impressive nutritious profile while being low in calories as its about 94% water. It’s also a great source of beta-carotene, a carotenoid that your body converts into vitamin A. Check out the benefits of pumpkin here. 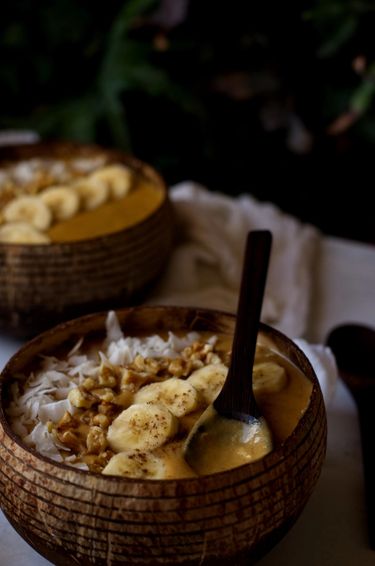 For this healthy pumpkin puree smoothie recipe, all I had to prepare was the roasted pumpkin and frozen banana. You can read about how to prepare pumpkin puree above — just make sure that the puree is chilled for when you plan to make the smoothie bowl.

Freezing banana is equally as simple: simply slice your banana and lay the pieces out on a tray on top of the parchment and store these in your freezer for about 30 minutes. Once the banana slices have hardened, you can put all the pieces in a storage container or bag. The reason why you should freeze banana is that it makes the banana smoothie creamier. 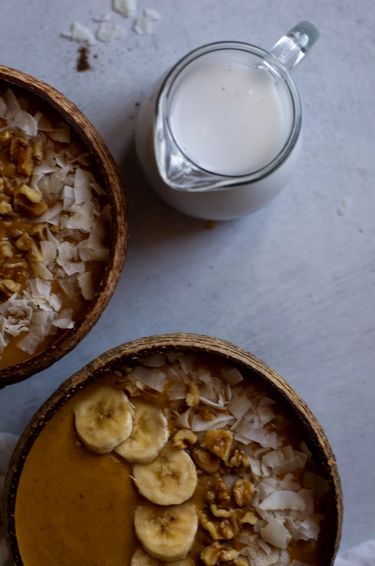 Lastly, you'll need your spices and toppings. I use ground nutmeg, cinnamon, ginger, allspice and cloves. I also add pitted dates for that Moorish sweetness and peanut butter for nuttiness. For toppings, I use large coconut flakes, crushed walnuts and freshly, sliced banana. You can also save the pumpkin's seeds from your pumpkin and roast them to use as toppings. 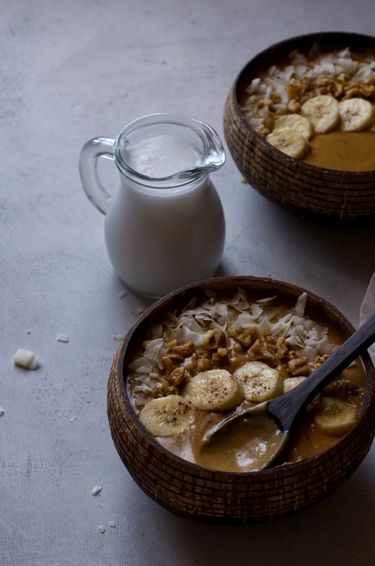 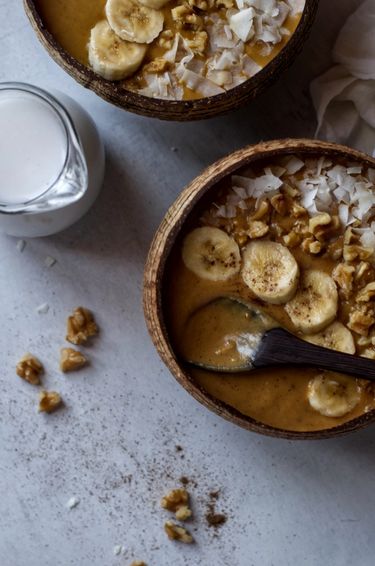