Have you heard such a thing as glamping?

If you're anything like me (a travel-crazed, also food-obsessed, borderline millenial), you may have stumbled across the concept of 'glamping' — a form of luxurious or 'glamourous camping'.

My instafeed made sure I'd know.

I saw a tent. But a fancy tent, WITH BEDS and TOILETS. I shrugged it off at first, continuing to scroll down the rest of my NOW mediocre feed. But I eventually succumbed to, I suppose, fomo. I began to think 'Who are these people and why are they in the middle of a jungle, enjoying the comforts of a hotel?'

I decided to investigate. It turns out that glamping sites, as well as unconventional holiday lodgings, have boomed of late, since more and more travellers are eager to experience stays that imbue a sense of adventure at its most rogue.

My turn to experience glamping arrived when I was planning a trip to the Philippines with friends who were travelling in the area. We researched which part of the Philippines would cater for the best island experience. In the end, we settled on a wonderful island called El Nido, in Palawan Philippines. It was exactly what we were looking for.

Where to stay in El Nido Palawan in the Philippines?

We began a search for El Nido Palawan resorts, hotels and airbnbs, of which there were plenty, espcially in its busling town. But we were on the lookout for something that would give us a memorable island experience in El Nido. We decided to stay away from El Nido's centre, instead choosing to embrace the paradise Palawan had to offer. That's when we came across the marvelous glamping boutique hotel The Birdhouse El Nido.

Arriving at The Birdhouse El Nido

Excited to begin our adventure, we flew into Manila from Singapore as you can easily get to El Nido Palawan from Manila, the capital city of the Philippines.

We arrived at El Nido's airport which summed up to be a conveyor belt and a desk. Eager to get on with, we jumped onto our tricycle and drove a short while away from El Nido's town towards paradise. The Birdhouse El Nido is located in Corong-Corong, a more sparsely populated area compared to the denser El Nido town. Half an hour later, we were dropped off at the entrance of a recently developed shopping arcade, which sadly looked like its destined to be filled with soulless chains and souvenir shops.  Thankfully, it wasn't long before we emerged onto sand, adorned by  towering palm trees and, for better or for worse, a string of beach bars along the ever so popular Maremegmeg Beach.

Coming from an island dependent on the tourist industry, I almost had a feeling of resentment, when I saw the place teeming with tourists. This wasn't my idea of a retreat into the wilderness. But as we continued to walk past the beach resorts and bars,  my opinion of the area changed.

We almost walked the entire length of the crescent-shaped beach to get to the The Birdhouse's landmark — a coconut stall (as you would in the Philippines). As we walked away from the beach into somewhat dense jungle, we began to notice a few rugged local huts and what appeared to be an encroaching cliff-face. We had reached our destination. Or so we thought.

The Birdhouse, is nestled in the rugged cliffs of El Nido.  To get to it, you've got to climb a hell of a lot of bamboo steps. Yep, that does mean that I can't recommend it for wheelchair users or anyone who has difficulty walking. 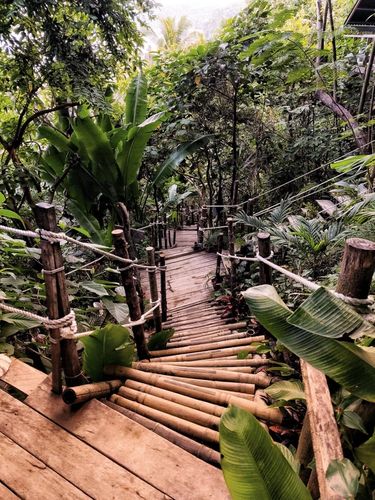 Thankfully, The Birdhouse cleverly put thought into this, by adorning the steep stairs with uplifting and inspiration quotes to get you through it. And a team who helps carry the luggages all the way to the top, for you. The Birdhouse boys really put us to shame as they scurried up the sloping stairs with all our belongings, as if it were a stroll in the park.

When we got to reception, out of breathe but gleeful, we were greeted by the owner Mark, who is also a resident at The Birdhouse.  After a quick refreshment and a few deep breathes, we walked further up towards our bell tent on stilts — a treehouse inspired lodging. For a moment, I had forgotten all about Mark's presence, as I was taken aback  by the most marvellous of views.

The jagged and expansive views of  Bacuit bay and its neighbouring islands such as Cadlao Island and Helicopter Island, were breathtaking. Add a magestic sunset to the picture (accompanied by a cocktail and a campfire). 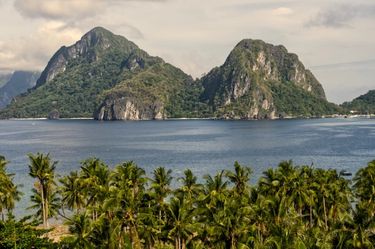 Mark, who recognised that we were aching to explore the tents known as 'Nests', quickly began to explain the amenities, such that each nest is complete with solar powered lights and water heaters, as well as  electrical outlets. The tents don't come with AC — instead they have large fans on either sides of the bed, which was more than we needed. Each tent also has a private bathroom, running on rainfall.

Mark let us know that we also have complimentary water refills, breakfast and basic
eco-toiletries. He stressed that the place runs on eco-centric principles, giving attention to recent water shortages in the Philippines.

When Mark headed back to reception, we scurried to the tent to find the cosiest, bohemian design. The tents, were spacious, accommodating up to four guests, but perfectly suited for a romantic getaway. They were also well separated from the each other, as they were staggered across the cliff-face, providing adequate privacy, 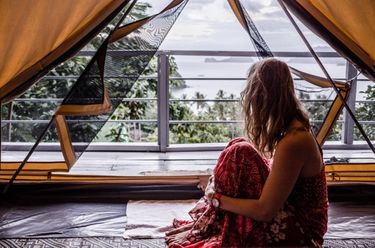 We weren't alone for long though, as we were joined by The Birdhouse's friendliest mascot. This little critter wasn't the only one to visit us during our stay. We had plenty of birds, frogs and geckos surprise us at all hours. 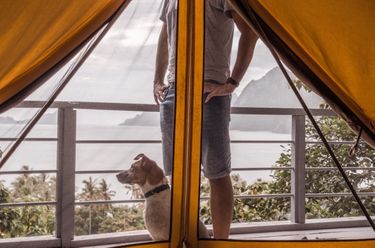 On our first night, we decided to eat at The Birdhouse's restaurant 'The Nesting Table El Nido, which is recommended in El Nido Palawan travel guides. The food menu consisted of both typical Filipino dishes like chicken adobo or garlic shrimp, as well as Western favourites. 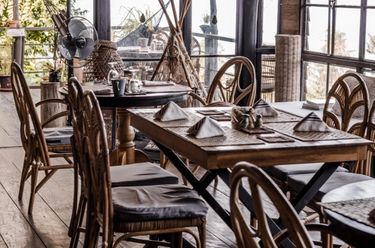 We also got to enjoy the outdoor lounge which is an extension of the indoor restaurant. 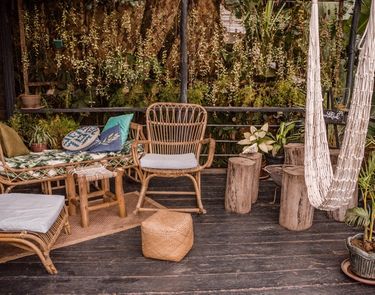 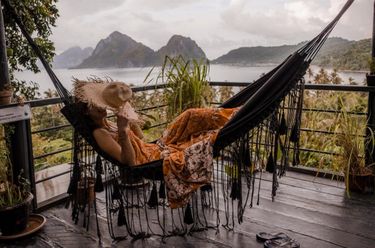 The outdoor lounge is also equipped with a BBQ pit where we invited to enjoy delicious s'mores. 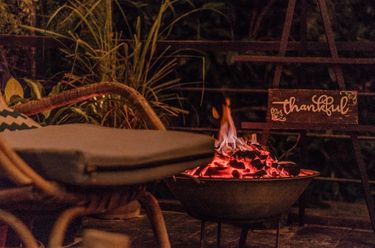 It's not hard to explain why this was our favourite hangout in El Nido. We even made use of the outdoor space for breakfast,  available to guests every morning. As there's a minimum two night stay at The Birdhouse, we were able to enjoy a fry up one day and a healthy porridge the next.

We also loved the idea of having access to yoga classes although we weren't able to find time for a class due to our tight schedule. The studio was incredible, as it was at the very, very top, where you get even more commanding views of the islands. 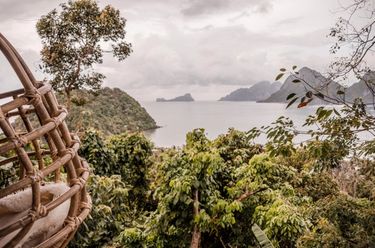 Classes happen at sunset with mats and towels provided for guests. Makes me wish I had more time! 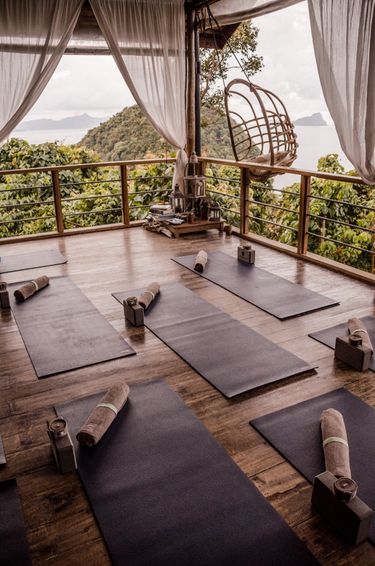 The Bird House also organises El Nido island hopping private tour packages (including the infamous Nacpan beach), which you can explore on their website. However, you can also stay local for a few days, as there are a number of activities you can do in the area. 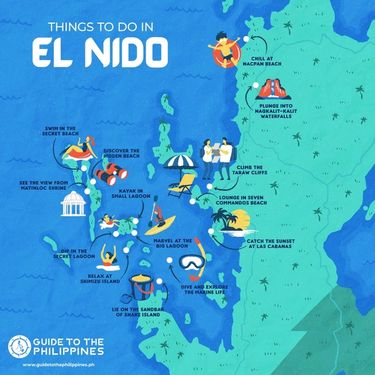 You can zipline across Depeldet island. You can rent a stand-up paddle boat or kayak and head over to Seven Commandoes beach or Ipil Beach via Bacuit bay. You can snorkel with turtles.  Or you can just lounge at at beach bar whilst watching the tide rise.

Whilst we were there, we opted for the kayak. It took us just under an hour to kayak all the way to Seven Commandoes beach. The current was against us, so it was quite taxing on the shoulders. But once we got to the shore, we were rewarded with quiet, white sand beaches, turquoise water, tall palms, makeshift swings and the occasional coconut stall.

If you decide to hit the town of El Nido, the closest a vehicle can get to The Birdhouse is at the entrance of Maremegmeg beach, so some walking will be involved. There, you'll find plenty of tricycles waiting at the end of the newly built shopping arcade. My recommendation is to have The Birdhouse book you a tricycle, as the couple of times we flagged one, we didn't get a fair price. If you're returning at night, remember to have enough phone battery to use your torch, as it gets pretty dark. Then again, one of my favourite moments was when we arrived at Maremegmeg beach past 10pm to find it completely asleep, save for the waking tide pushing its way up to the footpath. Nature was at work. 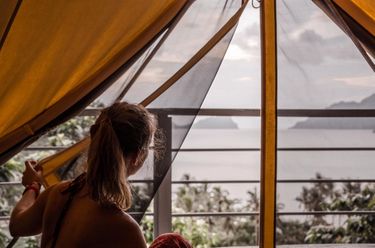 Are you know thinking of glamping in El Nido? You can book El Nido directly via their website. Being an boutique resort with only five tents, it fills up fast so don't leave it to the last minute!

If you found this review helpful, please let The Birdhouse know when you book!