The Maltese Ftira or ħobż biż-żejt (literally, bread with oil) is the quintessential Maltese snack — a sandwich packed to a punch with delicious ingredients. The fitra sandwich accompanies you to the beach, it's prepared in batches for sharing at picnics and it's definitely an essential activity when hosting international friends. But when we're enjoying a Maltese ftira as a local or visitor, little do we think about how Maltese bread came about. 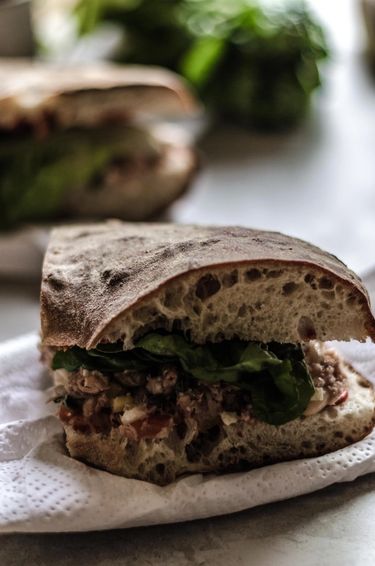 I interview Anthony's Bake to learn more about the past, present and future of Maltese bread.

An introduction to the past, present and future

Bread has been a staple for Western societies since the beginning of time. Wheat grain was readily available, and the transformation of flour into bread, fed numbers in the millions. Malta was no exception (although the number of mouths to feed where much fewer), being one of the smallest countries in the world.

Ħobż is the Maltese word for bread. This word has been appropriated from the Arabic language used by the ruling Arabs in the 11th century. Even the very making of ħobż may have been influenced by our previous occupiers, the Romans. The Romans had brought with them their own baking techniques and technologies to Malta.

There are different types of Maltese bread. Maltese bread  (ħobż Malti) is known for being round in shape, with a dark outer crust and soft, interior, full of air pockets. Another popular type of bread is the ftira, from the verb fattar - meaning to flatten (the dough). We know this because it was described by the linguist Giovanni Francesco Agius de Soldanis in his Damma — a 1766 dictionary on preparations in the Order of St. John’s bakery in 1742. The ftira is made of the same ingredients as the ħobż Malti. Flat in shape, it usually has a hole in the middle, making it look like a huge, irregular doughnut.

As long ago as the 16th century, the Maltese took their wheat and barley to the windmill to grind. Bakers made bread in community ovens, scattered across the island.

Traditionally, Maltese bread required a long process of preparation. Bread-makers would mix the sourdough starter (dough from the day before) with the day's dough. By adding the sourdough culture to their dough, bakers gave their bread a tangy flavour.  The batch of pastry would be kneaded by hand in a large basin until the dough was of the right texture and consistency. Once the dough was ready for resting, bread-makers would scatter some flour on top of the dough and cover it with a cloth before letting the dough rest for hours in a warm place, sometimes turning it over one to two times. By allowing the dough to rest, it would double in size.

Once the dough was ready from proofing (or the process of fermentation), the dough would be portioned and shaped according to the style of bread and then placed on a floured wooden tray. Bakers would sometimes mark the side or the top of the loaf with a knife or a twist with the finger representing their family symbol, so as not to confuse whose bread belonged to who.

It is said that those using communal ovens would put a twisted turban on their head to hold the heavy wooden tray steady while being carried along the rough roads to the nearest oven.

Communal ovens were heated to 450-500 degrees Fahrenheit to bake bread. At the time, thistles and brushwood were used to get the stone oven going. Sometimes, bundling of these thistles even served as payment to bakers in return for bread.

It would take around 1 hour to bake a ħobża Maltjia. The process was different for the ftira, as it required the frequent use of one’s hands, particularly during the formation stage, to flatten it, remove all gases trapped in the ftira, and include the tiny hole in the middle. It was then baked, fairly quickly, 20-30 minutes, at a high temperature.

Once the bread was brought to the table, the sign of the cross was made on the loaf with a knife before cutting the bread, as a symbol of gratitude for having food on the table.

Children were taught to pick up any discarded bread, kiss the bread and put it in the holes of rubble walls or feed it to the animals as a sign of respect.

When I was a child, I had my own way of showing respect. I would pick at the soft interior, eventually creating a cavity inside the bread. My mother would exclaim, ‘Oh dear, it looks like a mouse got to the bread!’. I’m certain that I wasn’t the only one guilty of that!

I was told that, unlike in the past, bakers today need to deal with large volumes (150kg). This means that the kneading is generally not done by hand, but by machine, allowing for correct consistency and texture across all loaves.

Anthony’s Bake drew attention as to why most Maltese bakers have shifted to an electric oven. Whilst stone ovens are still used, particularly by small bakers, they has become uncommon. Stone ovens are still powered by burning wood (using newspapers to help spread the fire). Yet, there is difficulty in actually sourcing such wood. For health reasons, the wood needs to be clean (from any paint, polish or other treatments) and this is increasingly difficult to find. Another challenge is the inconsistent temperatures with stone ovens: once the bread is put in the oven, the baker does not feed the oven more wood and hence the temperature starts to settle and fall, whilst the bread is baking. Anthony’s Bake also stated that local knowledge and tools required to fix traditional stone ovens is practically non-existent.

Electric ovens also facilitate the work of the baker in placing and removing bread from the oven. Modern electric ovens come in the form of drawers such that the bread is easily reachable. With stone ovens, a long wooden shovel was used to take the bread out of the scorching oven, sometimes causing difficulty.

Nevertheless, despite the advancements of technology in enabling bakeries to increase production in a more efficient way, century-old recipes are still being used. Perhaps, the importance of bread as a family's main food source together with the tradition of baker's marking their batch of baked goods has been lost; yet the present reflects an end to the harsh, frugal life many Maltese were subject to in the past.

Due to the ftira's colourful history, the ftira is in the process of being considered by UNESCO as to whether it should feature as a UNESCO intangible cultural heritage. If this is the case, knowledge and skills around Maltese baking will be safeguarded in the hope of these being transmitted from one generation to the next.

If you’re wondering what to eat in Malta, you’re on to a good start. And if you can't get enough, here's my recipe for Malta's infamous tuna sandwich or ħobż biż-żejt. I personally think this beats a tuna and mayo sandwich any day!

The main ingredient for Maltese tuna ftira is, of course, canned tuna. Luckily, canned tuna is low in fat and calories, high in protein and a good source of vitamins and minerals. Canned tuna also contains less mercury than fresh tuna, because the fish in canned tuna tends to be younger.

If you're making ħobż biż-żejt, make sure to choose tuna in water, for the healthiest option. One 3-ounce serving of light tuna canned in water provides only 73 calories and less than a gram of fat.

Also, go for brands that declare they are providing a 100% pole-and-line and FAD-free skipjack, as these are the most sustainable. 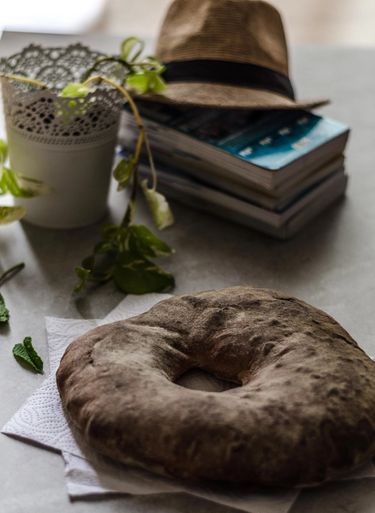 Local Ingredients that can be swapped

As for Maltese ftira — it isn’t typically available outside of Malta but do check out the list of places where you can find Maltese ingredients abroad, at the end of this recipe. If you can’t find Maltese bread, you can always replace it with your local sourdough bread.

As COVID-19 brought out the sourdough bakers in a lot of us (yes, I too hogged the flour), I was happy to learn that, sourdough is lower in sugar and higher in protein than regular bread, due to the process involved in activating its gluten content. And, the presence of bacteria, due to sourdough’s unique fermentation process, improves sourdough’s nutritional profile. Hooray to bread that's good for your gut!

Another ingredient that you may need to replace is kunserva, a tomato paste that is sweeter than the versions you find abroad. Using regular tomato paste should work just fine. 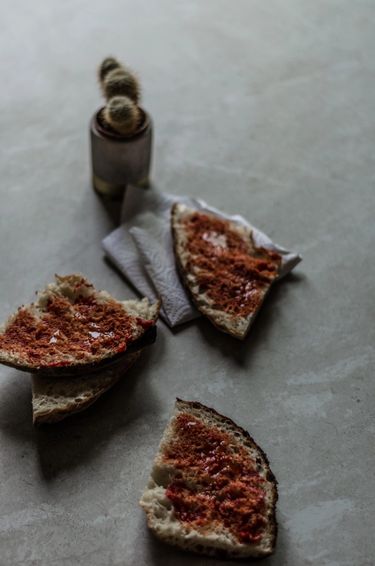 Lastly, it is typical to add Maltese goat's cheese called ġbejna, which is vinegary in taste. It is unlikely that you can source abroad but you can get away with a crumbly goat's cheese or feta if you will.

Recipe for a healthy tuna salad sandwich from the Maltese islands 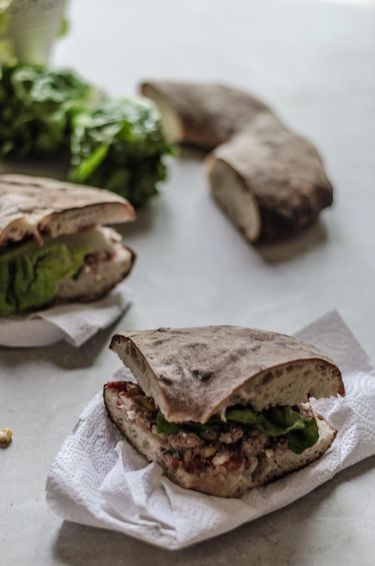 TIP: Wrap your sandwich (I use beeswax) and place a weight on top to weigh it down; set aside for at least 15 minutes so the ftira absorbs the flavours.

Where can I get Maltese ingredients abroad?

These are some shops that sell Maltese ingredients around the world. Know of more? Give me a shout in the comments section, below.

The Malta Bake Shop opened its doors over 30 years ago in Toronto, Canada.  The Malta Bake Shop is owned by Charles and Antoinette Buttigieg, a married couple from Malta.  The café serves fresh homemade pastizzi filled with traditional ricotta or cheese, as well as other varieties including potato and onion.   Additionally, the café also serves fresh Maltese honey rings, krustini and Kinnie.

Leli’s Bakery and Café can be found in the commercial neighborhood of Astoria, New York.  The café opened its doors in November 2012.  Leli’s serves up a range of Maltese food freshly baked instore, including traditional Maltese bread, Maltese honey rings, ricotta-filled qassatat and of course, pastizzi.

The Maltese Cultural Movement delivers Maltese goods to London. Check out their website for what they have in stock such as Maltese tomato paste used in this recipe. They are open to requests too.